Ever since its launch in 2011, the China-Europe rail transport service has proven a powerful example of how Belt and Road cooperation can drive common development and prosperity of China and Europe with enhanced connectivity.

Yiwu, China’s small commodity hub in the eastern Zhejiang Province, is among the many cities across the Eurasian continent that benefit from the service. The city will launch more than 1,500 Europe-bound freight trains this year, according to a work report of the Zhejiang provincial government.

The cargo route linking Yiwu with Europe via Xinjiang in northwest China handled 1,399 China-Europe freight trains in 2020, soaring by 165 percent year on year, said the report reviewed at the ongoing annual session of the provincial legislature.

As a major foreign trade engine in China, Zhejiang saw its exports grow by 9.1 percent, year on year, to nearly 2.52 trillion yuan (about 388.5 billion U.S. dollars) in 2020. It accounted for 14 percent of the country’s total export volume.

For Yiwu’s part, cargo train service to Europe had started on Nov. 18, 2014 and expanded rapidly in the years to follow (see chart below). Since its launch, the cargo train service in Zhejiang has opened 15 routes, connecting 49 countries and regions in Asia and Europe. 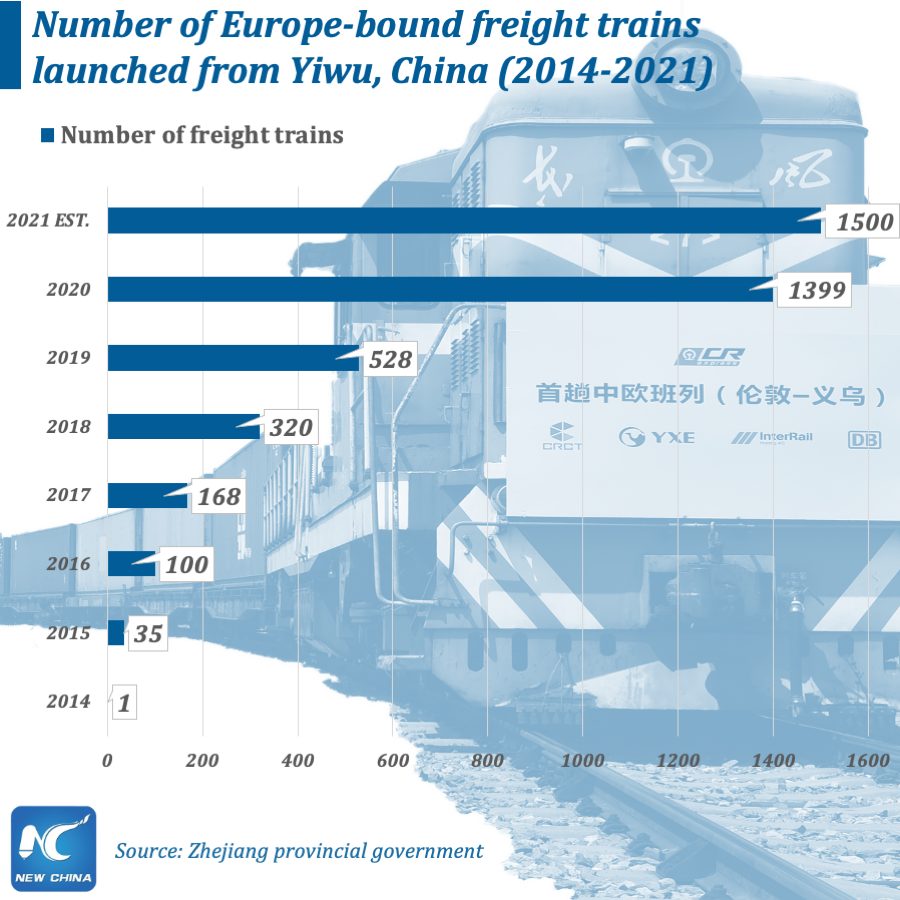 Rumbling along the routes, the freight trains take garments, auto parts, chemicals and other Chinese goods to European consumers, while taking back European food, machinery, equipment and timber on their return journeys.

As the COVID-19 pandemic greatly affected sea and air transport capacity, the China-Europe freight train service played a significant role in stabilizing international railway logistics. It ensured the smooth transportation of goods including epidemic control materials, given its all-weather, stable and regular features.