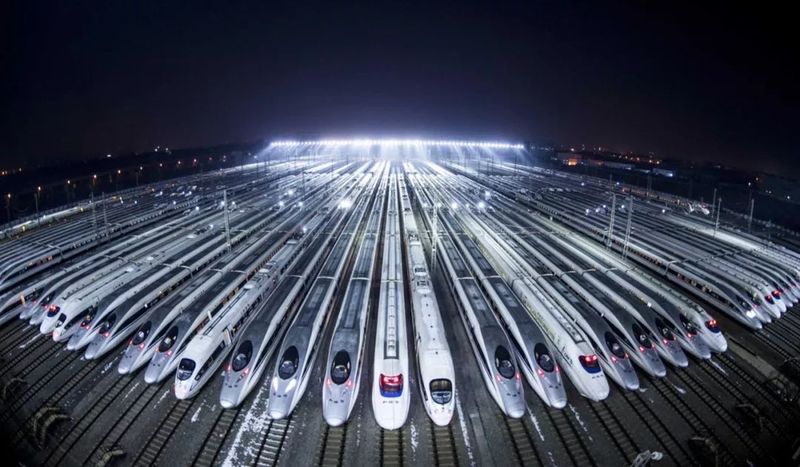 New railway lines－both regular and high-speed－were put into operation last year as China continues to expand its railway network, including a major line connecting Beijing and Xiong’an New Area in Hebei province. Xiong’an has been considered as China’s “city of the future”.

Another high-speed line that opened last year connects Yinchuan, capital of the Ningxia Hui autonomous region, and Xining, capital of Qinghai province, extending the high-speed railway network to Ningxia. In addition, a line linking Golmud in Qinghai to Korla in the Xinjiang Uygur autonomous region that began operations last year is the third railway linking Xinjiang and other regions in China.

Last year, 4,933 kilometers of new railway tracks were put into operation. This year, the goal is 3,700 km.

China’s railway network has developed rapidly in the past decade－particularly the high-speed network, whose length has nearly doubled in the past five years to 37,900 km, ranking first in the world.

According to a blueprint from the China State Railway Group, the national railway operator, the country will continue to expand the railway network. A total of 200,000 km of tracks is planned by the end of 2035, including about 70,000 km of high-speed lines.

China’s domestically developed Fuxing－meaning “rejuvenation”－bullet trains can travel up to 350 km per hour.

The China State Railway Group said 1,036 Fuxing bullet trains have been put into operation since 2017. The trains have made a combined 827 million passenger trips and have traveled 836 million km.

More high-quality and flexible services were provided such as electronic tickets and quiet carriage seating.

E-tickets are available in 2,878 railway stations, benefiting most railway passengers.

In the meantime, traditional ticket windows continue to assist people without smartphones or access to the internet.

The network handled 2.16 billion passenger trips last year and is expected to handle 3.11 billion this year.

Despite the global spread of COVID-19, a record 12,400 freight trains carrying a total of 1.14 million containers operated between China and Europe last year.

The number of trains was up 50 percent year-on-year, while the freight volume was 56 percent higher.

The trains helped carry daily supplies and epidemic control products between the country and the continent, facilitating international cooperation in controlling the pandemic.

China-Europe routes prospering despite impact of pandemic in Southwest China