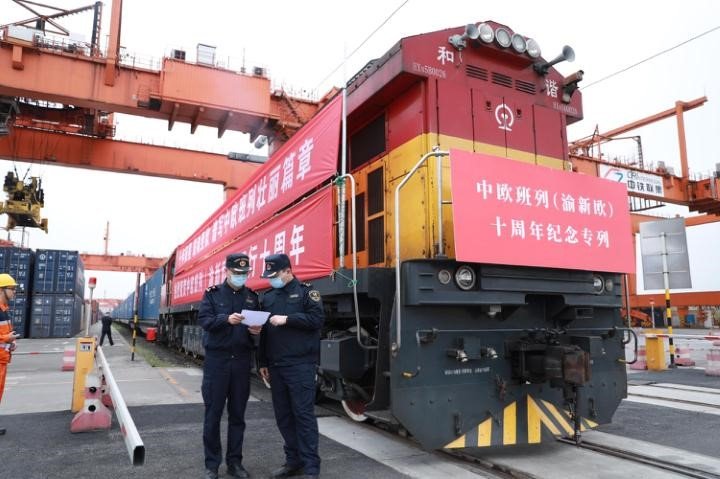 By using its geographical characteristics and local traffic conditions, together with its Yangtze River golden waterway and air transport links, Chongqing has developed a four-directional international logistics channel, which has turned the city into a new open gateway for Chinese inland trade within the country’s new development pattern.

From September 2010 to March 2011, the Chongqing government formulated detailed, step-by-step work plans, and overcame plenty of technical and personnel difficulties in order to meet local enterprises’ demands to carry their products directly to Europe in the west.

Now the China-Europe freight trains (Chongqing-Singapore-Europe) have completed more than 8,000 trips, carrying Chongqing-made commodities worth nearly 300 billion yuan ($45 billion) westward to Europe, which used to be beyond reach, without first transferring the goods to shipping.

Meanwhile, the China-Europe freight trains also make it possible for Chongqing products to travel directly to Russia in the north, through Siberia.

China and Singapore officially signed a cooperation memorandum on the New International Land-Sea Trade Corridor on Nov 2018, in a bid to increase connections between the inland provinces of China and the rest of the world. This was exciting news for Chongqing and the countries to its south.

From January to May, Chongqing cumulatively made 781 trips through the new land-sea corridor, a year-on-year increase of 150 percent. It is calculated that the corridor has linked 304 ports from 105 countries and regions, and a total of 519 types of goods are transported through it.

With the launch of Chongqing-Ningbo trains, Chongqing is managing to strengthen its business relationships with eastern provinces on the Yangtze River Economic Belt, which is considered one of the most promising regions in China.

Ružbacký, CEO of PKP CC: the New Silk Road should be one of the priority projects of the Polish economy

China to set up more CBZs this year