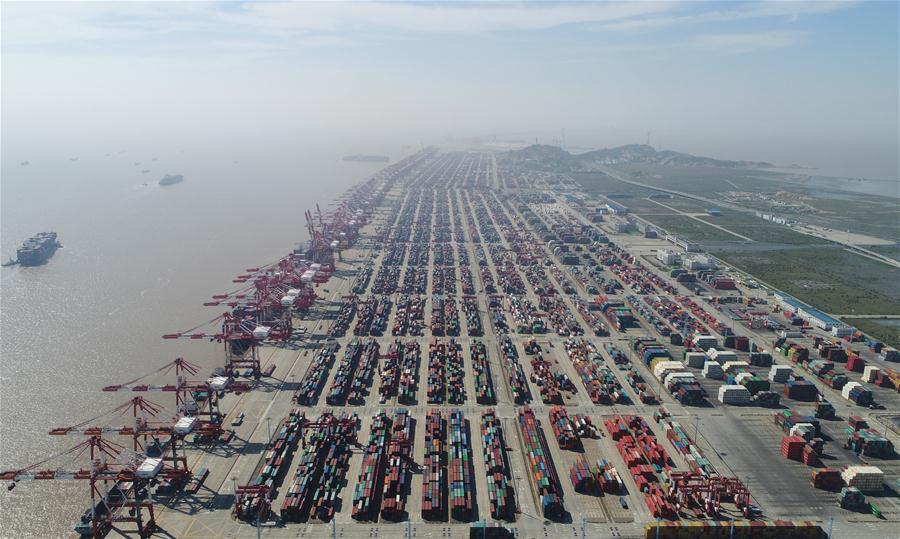 Chinese producers and exporters are diversifying China-Europe trade routes by redirecting some orders from ships to trains and planes in an effort to tackle disruptions and uncertainties posed by the COVID-19 epidemic in Shanghai and some neighboring regions in the Yangtze River Delta, a major production and trade center.

The shift came as the port in Shanghai, the world’s largest port in terms of container throughput, faces rising stockpiles of containers. Some large international shipping companies are suspending goods delivery at the port, posing serious challenges to the timely delivery of goods.

Some 60 percent of the goods lying at Shanghai port are “unclaimed” due to logistics disruptions on the roads and at sea, while the port has reached its limit and can hardly accommodate more containers, industry insiders said. The pressure has been passed on to the neighboring Ningbo Zhoushan port in East China’s Zhejiang Province.

In the face of lingering uncertainties involving sea transport, some producers and exporters engaged in China-Europe trade are looking to diversify their trade routes from ships to trains and planes.

A trader based in Yiwu, a major small commodities trade hub in Zhejiang, told the Global Times on Sunday that he has received more inquiries from clients about diverting sea shipments to China-Europe freight trains.

“Trains take far less time and they’re more punctual, which is important, especially for those more urgent or high-value goods,” the person said.

What normally takes about 35 days by sea from Yiwu to cities in Germany only takes about 18-20 days by train, the trader said, indicating a clear competitive advantage for train service in avoiding disruptions.

In the first quarter, 370 China-Europe freight trains were dispatched from Yiwu, a year-on-year rise of 10.1 percent, a trend that industry insiders said would be sustained to ease the pressures at sea ports.

A factory manager in Yiwu told the Global Times on Sunday that the train is punctual, even though it may cost more than sea freight and the transport capacity is much lower. Planes are also part of his consideration at the moment.

The European Union Chamber of Commerce in China noted that its member companies estimated a 40 percent drop in the daily volume of cargo handled at the Shanghai port, according to media reports.

Wu Minghua, an independent industry analyst, told the Global Times that the major cause of sea freight disruptions is actually on land, as truck drivers are still having difficulties in getting in and out of the port due to epidemic controls.

While cross-border freight trains can be an option in difficult times, sea transport will still be the main transport for international trade, industry experts said. A train can usually carry 50 standard containers, while a large ship can carry around 20,000.

Some small and medium-sized traders are shifting to the Ningbo Zhoushan port, which is also under growing pressure. To smooth operations, the Shanghai Port has looked to strengthen the use of inland waterways and railways to unclog transport.

The situation eased after the State Council, China’s cabinet, urged local governments not to shut down highways without authorization.

The pressure on Shanghai port is temporary and will dissipate when road transport returns to normal, experts said. Until then, cross-border freight trains will play an important role.