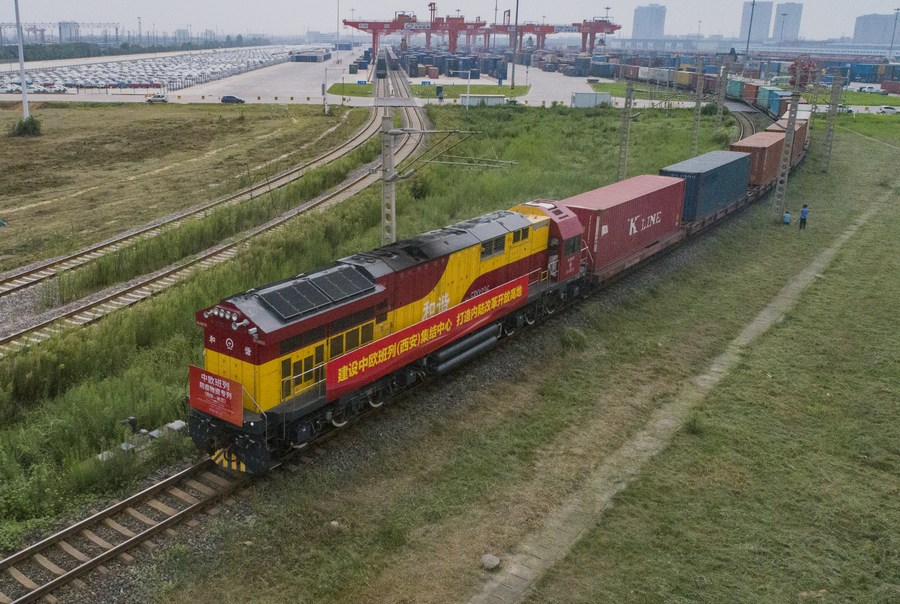 Government officials, railway service providers and international traders are putting in place contingency measures to ensure smooth operation and trade flow of the China-Europe freight train, a key transportation channel for trade covering countries along the routes of Belt and Road Initiative (BRI), amid the deteriorating situation in Europe.

While some large logistics companies in Europe and America have suspended accepting business from the China-Europe freight train, the channel itself has not stopped operating – the railway between Europe to China via Poland, Belarus and Russia remains open, industry insiders told the Global Times.

But with the widening Western sanctions imposed by the West on Russia, especially after Russian Railways appeared on the sanction list, China-based international traders are halting overseas orders while evaluating the possible impact on the cross-continent rail freight operations, and some are seeking cargo insurance package that covers war risks.

Taking the China-Europe freight train starting from Shanghai as an example, originally, there were four China-Europe freight trains dispatching from the city each month, but the schedule changed after some companies began canceling orders, the Shanghai Observer reported. It claimed that trains originally scheduled to depart on March 7 were postponed to Thursday, with around 40 containers withdrawn by customers.

Feng Xubin, vice chairman of the China-Europe Freight Train Transportation Coordination Committee, told the Global Times in a recent interview that the situation in Ukraine has caused many exporters, especially “cash-on-delivery” companies, to stop shipping to Russia, Ukraine, and other countries in Europe and Central Asia, with several vendors cancelling planned shipments.

A veteran merchant based in East China’s Zhejiang Province told the Global Times on Wednesday on condition of anonymity that “European freight forwarders have begun to avoid the Russian railway, which is an important transit of the China-Europe freight train, while trading companies have begun taking a wait-and-see approach.”

Due to the geopolitical tensions, the market demand for trains in Shanghai has fallen by 40 percent, with the frequency of trains halved, the Shanghai Observer said.

While the conflict in Ukraine has impacted European clients and Chinese domestic traders from picking the cross-border cargo train to deliver goods in order to fend off the risks, the current railway operations from China to Europe remain safe and smooth, industry insiders said.

“Businesses have felt the pressure from potential disruption, but all the railway lines are operating normally, except those passing Ukraine, which take a puny percentage and are detoured already,” Tan said.

According to media reports, Shanghai has recently been preparing to increase the number of trains returning from Germany and other places.

Industry insiders said that at present, the major concerns among international customers include difficulty in obtaining compensation from insurance companies, should goods be damaged or lost, and risk for not being able to get the railway freight settlement if Europe cuts off Russia’s intermediate settlement channel as part of ongoing economic sanctions. In order to secure the goods, traders are seeking a new insurance that covers all the potential risks, including war risks.

“War risk is an already existing clause… most insurance companies use war risk as an additional insurance for all cargo risks,” Tommy Tan, president of Shanghai EPU Supply Chain Management Co, an agent of China-EU freight trains, told the Global Times on Wednesday.

But insiders said that with the situation deteriorating in Europe, the higher cargo risks have made it much difficult for traders to get the insurance covers the war risks.

In order to ensure the smooth operation of train service, government officials and logistic companies are moving around to assure that the train service will not be affected by the situation in Europe.

At a recent internal meeting with international traders, Han Jie, director with the commerce bureau of Zhejiang said on March 10 that the government will ensure the operation of China-Europe freight train while assisting manufactures and merchants to be proactive in managing risks, the chinanews.com reported.

Also at the meeting, Zhejiang branch office of the People’s Insurance Company Group of China (PICC) and the YXE Trading Service Group, the operator of the cross-border cargo train in Yiwu, reached an agreement to strengthen the construction of global supply chain. PICC will provide innovative insurance products and services that match with the business characteristics of the train service, according to the chinanews.com report.

A vendor with a China-Europe freight train logistic service provider who participated in the meeting told the Global Times that they are already talking with domestic insurance companies over accessing a new and wholly covered insurance for the freight train service, including war risk insurance.

“The negotiations have been going on for a week, ranging from insurance fees and the risks the insurance companies need to cover. Although no deals have been drawn yet, we are hoping to get more information this week,” the person said.

Also, the entire railway transportation time between China and Europe is now shortened from 24 days at the beginning of the launch to 12 days, insiders said.

One Zhejiang-based trader said that despite the potential hurdles, railway channel is still his first option, given shorter shipping period compared to ocean freight, which has a less competitive advantage in face of container shortage and tightened slot amid the logistic hurdles posed by port congestions in many parts of the world.

“What takes 14-16 day or even less from Zhejiang to Hamburg in Germany by train may take up to a month or even longer by ship,” the person said.