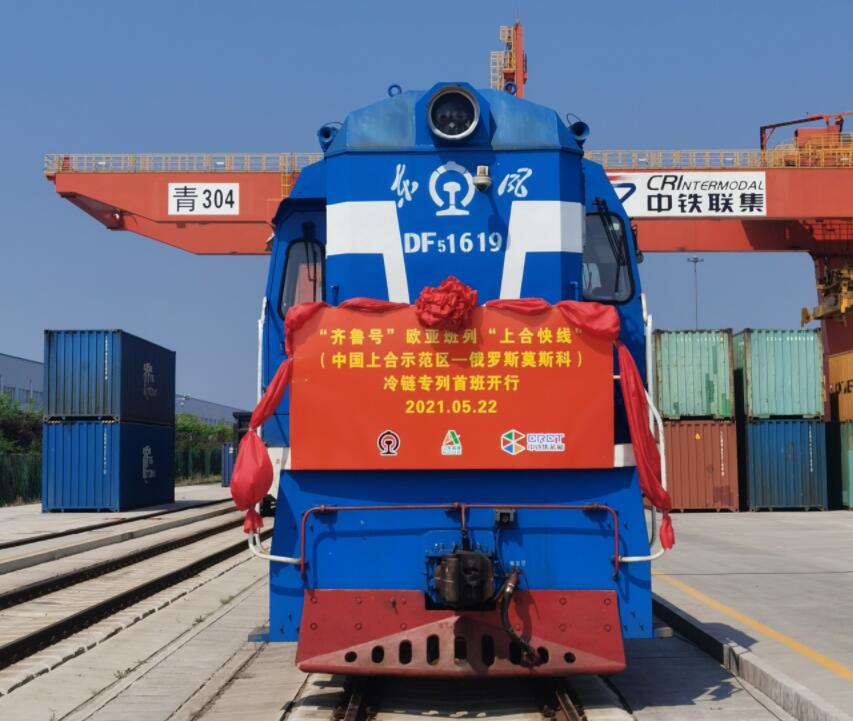 A freight train loaded with 100 twenty-foot equipment containers, or TEUs, of cargo left from Qingdao, Shandong province, in early May, headed for Tajikistan.

It was the first freight train to leave for the Tajik capital, Dushanbe, from the China-SCO Local Economic and Trade Cooperation Demonstration Area, or SCODA. The cargo included glazed tiles, tires and mechanical equipment.

Some 330 trips have been made by the China-Europe Railway Express freight service operated by a multimodal transport logistics center in SCODA between January and July. Customs data showed that this represented an increase of 66.7 percent year-on-year, with transported cargo more than doubling to 27,000 TEUs.

With its core area in Jiaozhou, a county-level city in Qingdao, SCODA is China’s first demonstration area for economic and trade cooperation with SCO member states. It aims to serve as a new platform for international cooperation under the Belt and Road Initiative, play a role in linking the East and West and enhance land-sea linkage across the continent.

“Great efforts have been made to expand freight train services,” said Zang Yuanqi, deputy director of the international logistics department of the SCODA administrative committee, adding that besides Dushanbe, freight trains have also traveled to Rotterdam, London, Milan and other European cities.

He added that trains from SCODA can reach 46 cities in 18 countries involved in the Belt and Road Initiative as well as SCO member states, opening up sea-rail logistics routes in all directions: east to Japan and South Korea, west to Central Asia and Europe, south to ASEAN countries and South Asia, and north to Mongolia and Russia.

The multimodal transport logistics center is home to Shandong’s only freight container station connected to the rail network and covers an area of 48 hectares. New facilities, including two 1,050-meter-long railway lines and a 12,000-square-meter warehouse, were completed last year, raising annual handling capacity from 540,000 to 1.12 million TEUs.

Qingdao Customs coordinates with peers at the border crossings of Manzhouli in the Inner Mongolia autonomous region and Urumqi in the Xinjiang Uygur autonomous region in order to facilitate customs clearance for China-Europe freight trains.

“As exports and imports increase, Jiaozhou Customs, which is under the administration of Qingdao Customs, has opened a special channel and reservation service to improve the efficiency of customs clearance,” he said.

Last year, China-Europe freight trains made more than 400 trips from SCODA, delivering 765,000 TEUs, up 15.9 percent and 14 percent year-on-year, respectively, according to official data.