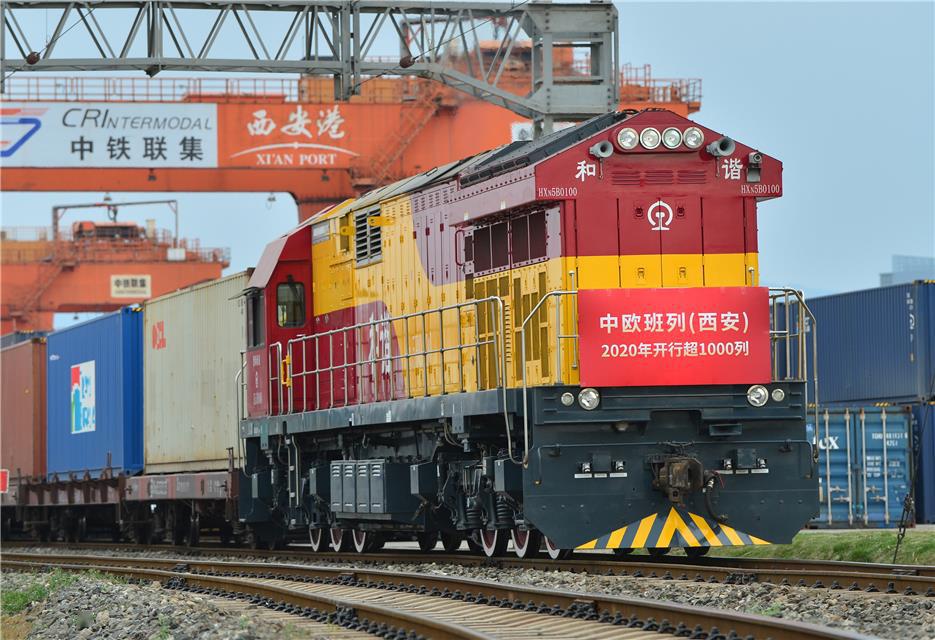 Loaded with automobile parts, apparel and other items, a navy blue freight train departed for Poland carrying made-in-China products for the European market.

The train, which left China via the Alataw Pass, a major rail port in Northwest China’s Xinjiang Uygur autonomous region, was traveling on one of the growing routes for the China-Europe freight train program, a rail connectivity project initiated by China to boost exchanges with European countries.

The trade project that began in 2011 shone through the COVID-19 cloud this year. The cross-border freight train service bucked the downward trend of logistics, ensuring steady supply and support, while air and sea cargo transportation had to bear the brunt of the outbreak.

Though the speed of China-Europe freight train service is dwarfed by plane or passenger bullet train, the pace of its growth in terms of delivery frequency and cargo volume has continued to reach new highs lately.

Across the country, 7,601 China-Europe freight train trips were made in the first eight months of this year, up 44 percent over the same period in 2019.

August alone saw the operation of 1,247 such trains, the fourth month in a row for the figure to top 1,000 and the sixth consecutive month registering double-digit growth.

The surge in China-Europe freight train trips is partly driven by rising market demand and powered by higher Customs efficiency. Thanks to digital customs service, the halting duration for the train leaving the Alataw Pass has reduced to as short as five hours, compared with 14 hours without the service, according to Yin Hufeixue, a Customs officer at the pass.

In line with the robust rise in cargo trips, trade volume has spiked. Some 113,000 twenty-foot equivalent units of cargo were sent in August, up 66 percent year-on-year.

The trade’s boost to supply chains is a two-way trip. Automobile parts made in China, such as tires and seats, are regularly shipped to Germany through the China-Europe freight train, while some European cars are exported to China using the same freight train service such as the train service transporting Audi vehicles to Northeast China’s Changchun city.

The products traded between China and Europe via the cargo service have expanded from electronic commodities to over 200 categories of goods including automobiles, wine and cross-border e-commerce parcels.

The China-Europe freight train service, as a land transportation artery like a contemporary railway version of camel caravans, has played an important role in keeping logistics unimpeded and ensuring a stable supply of materials to China, Europe and countries along the routes, said Zhao Lijian, a Chinese foreign ministry spokesperson, in August.

With travel restrictions disrupting global logistics, the China-Europe freight train service became a lifeline for transporting anti-epidemic supplies, thus bringing a glimmer of hope for people worldwide involved in the fight against COVID-19 while grappling with its economic fallout.

On March 25, a China-Europe freight train, loaded with more than 110,000 medical face masks and 766 units of protective suits, left the Alataw Pass, kicking off exports of anti-pandemic supplies to Europe using the train service. By the end of June, the cargo train service had delivered 3.67 million items of pandemic control supplies weighing 27,000 tons to countries including Germany, France, Italy, Spain and Poland.

The pandemic has created opportunities for China and Europe to expand bilateral ties, and China’s leading progress in restoring economic activities has boosted confidence for Europe and the rest of the world, said Sylwester Szafarz, former consul general of Poland in Shanghai, adding that Poland is working on a transportation project that is expected to facilitate freight train service to countries in West Europe.

China has vowed to further upgrade the freight train service. It announced an investment of 200 million yuan ($29.2 million) in early July for building train depots in five key logistics hubs of the train service, including Urumqi, Chongqing and Zhengzhou.

China-Europe routes prospering despite impact of pandemic in Southwest China