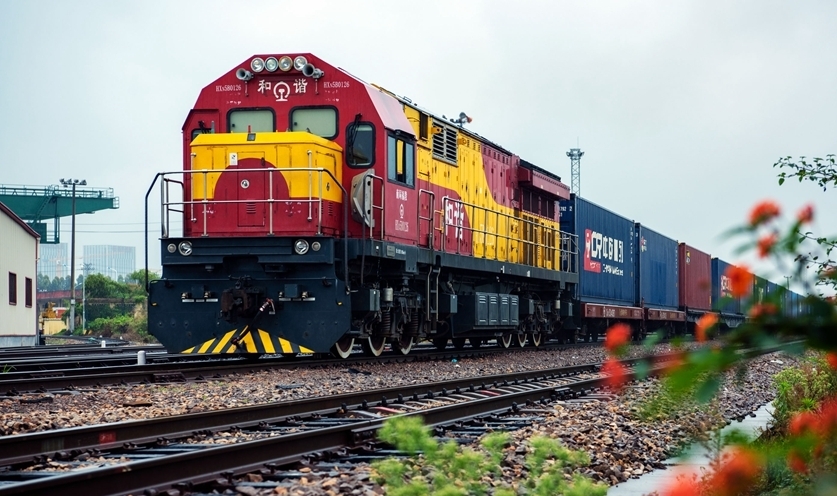 The China-Europe freight train in Xiamen, Fujian province, has become a vital logistics channel for ensuring Sino-European trade exchange and cooperation in the transportation of epidemic prevention materials.

On April 18, the train, with 50 containers full of shoes and clothing, electronic products, and anti-epidemic supplies, departed from the Haicang Free Trade Park to Hamburg, Germany.

“Thanks to the continuous and stable operation of the China-Europe train, the goods delayed due to the epidemic arrived in Europe on time,” said Wang Weidi, manager of the logistics department of TPV Display Technology (Xiamen).

“They timely met the production needs of overseas factories and effectively guaranteed the company’s production and sales in Europe,”

Wang said that in the first quarter of this year, the company exported 483 electronic containers in Europe, valued at about $58.6 million, up 19.6 percent and 45.1 percent year-on-year.

Zhong Lei, head of the business department of Xiamen International Train, said that since March, the frequency of the China-Europe freight train in Xiamen has increased from four trains per week to seven.

“We not only solved the urgent export problems of enterprises, but also helped them regain the production cycle that was delayed due to slowdowns in work and production,” Zhong said.

According to data from China Railway Nanchang Bureau Group, in the first quarter of the year, a total of 67 China-Europe trains were operated at the Haicang station, carrying 6,106 TEUs, and the value of goods was about $234 million. Compared with the same period in 2019, the number of ranks increased by 148 percent, and the shipment volume increased by 160 percent.

The China-Europe freight train in Xiamen is the epitome of China’s China-Europe train. According to data from China National Railway Group, the China-Europe railways opened 1,941 trains in the first quarter of this year, sending 174,000 TEUs. That accounted for increases of 15 and 18 percent year-on-year respectively.

Ding Changfa, an associate professor at Xiamen University’s School of Economics, said although China-Europe freight trains pass through many countries, its segmented transportation and a series of “contactless services” implemented in various regions make it relatively less affected by the epidemic and ensure smooth transportation.

Ding believes that China-Europe freight trains will still have great use in the future.

“On the one hand, as the epidemic in Europe is gradually brought under control and economic and social order is gradually restored, demand for Chinese products will increase, including consumer products and industrial parts. On the other hand, domestic enterprises will accelerate the resumption of work and production,” he said.

“With the pull of foreign demand and the promotion of domestic supply, the development of the China-Europe Express is worth looking forward to.”

Shenyang, China has optimized its land transport network and ensured that its customs clearance