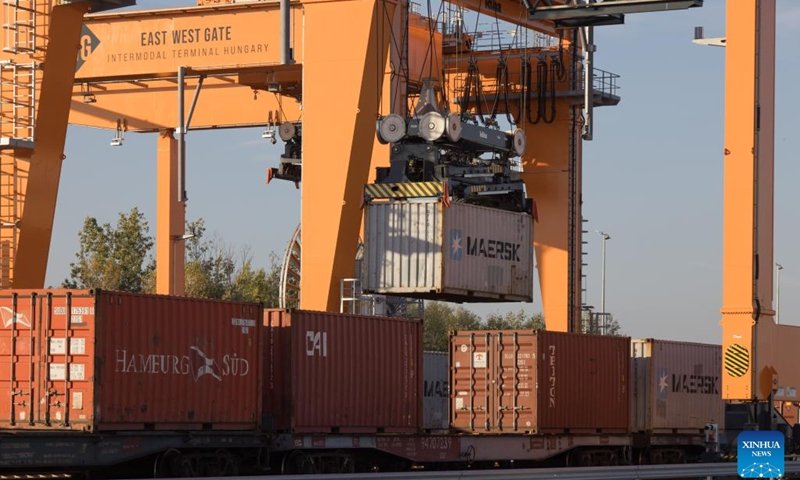 A mordern land-based intermodal terminal has been built with a private investment of more than HUF 40 billion (EUR 97 million) in Fényeslitke, in the immediate vicinity of the Hungarian-Ukrainian border. Located at the junction of the wide and standard gauge railway tracks, the East-West Gate (EWG) can handle up to one million 20-foot containers per year and is suitable for loading trucks and conventional road semi-trailers onto rail. The EWG also has a significant capacity for transhipment of agricultural products, hence could become the largest rail hub for Ukrainian food exports. The first train carrying Ukrainian agricultural goods rolled into the terminal at the handover ceremony.

In the region, which until 1990 was a major transit region for freight and a major source of employment, freight traffic and transhipment, necessitated by the gauge change, has been reduced in recent decades. However, the privately built EWG was completed in just over a year and can handle significant freight traffic with state-of-the-art technology.

According to EWG, the terminal can handle up to one million twenty-foot containers (TEUs) per year, making it the largest such facility on the continent in terms of theoretical capacity and area. The terminal is capable of trans loading containers between wide gauge and standard gauge, as well as between rail trains and trucks. EWG is also suitable for loading trucks and conventional road semi-trailers onto rail. This will allow to shift as much as possible of the freight traffic arriving by truck at the EU border to rail, in line with the EU’s climate objectives. EWG’s cranes are ATEX and ADR certified, so they can also trans load special materials such as gas container tanks and chemicals.

At the inauguration ceremony, the first train carrying Ukrainian agricultural goods, an EWG-organised consignment, rolled into the terminal. A total of 1,146 tons of wheat, millet and green peas shipped by Ugrain Trade LLC arrived in 44 twenty-foot containers, and after transshipment, they will be transported to the Csepel Free Port.

“With the construction of the East-West Gate, Hungary is back on the map of international rail logistics”-  stressed János Tálosi. The CEO of the investor East-West Intermodal Logistics Zrt. added that the most advanced technologies available have been incorporated into the terminal, making transport faster and more accurate. “EWG is independent and its services are available to any rail and road freight company in the world, open to all freight forwarding operators and carriers”, said János Tálosi.

EWG is the first in Europe to control cranes remotely using 5G technology. The terminal has a 41-metre wide and two 28-metre wide giant cranes on rails, as well as a 20-metre high rubber-tyre crane. The cranes, supplied by Austrian company Künz, are equipped with 20 high-resolution cameras, which, with the help of 5G, can be viewed in real time at the centre of the terminal and can react in the same way, without delay, so that they can control the cranes as if they were working in the crane cabin. The private 5G network required for this was built by Vodafone Hungary and the network equipment was supplied by Huawei.

From November 2022, the terminal is expected to be capable of handling 800 tonnes of grain and 450 cubic meters of sunflower oil per hour, making it the largest rail hub for Ukrainian food exports, according to the company.